During the demonstration held on Saturday afternoon in the Place de la République in Paris, shouts of " Sales Juifs " (dirty Jews) were uttered, recorded and broadcasted on social networks. Crif firmly condemns these intolerable acts, which moreover come from demonstrators claiming to denounce racism. Crif strongly recalls that antisemitism cannot be tolerated and reminds the organizers of their responsibility in the face of these unacceptable abuses. There can be no fight against racism, which directly or indirectly tolerates antisemitism in its ranks.

Crif is also particularly shocked by the reaction of Jean-Luc Mélenchon, (leader of Extreme Left party) questioning the reality of these antisemitic remarks, yet recorded and accessible to all. Perhaps Jean-Luc Mélenchon is once again deaf and blind to antisemitism when he seems to come from his ranks.

For the President of Crif Francis Kalifat "the excesses of this demonstration are an insult both to the Republic but also to the cause that claimed to defend the demonstrators." He "calls on all democratic political parties to denounce these dangerous abuses and calls on the Public authorities to take exemplary actions and condemnations".

Crif condemns with the same firmness the violent anti-Israeli slogans, which do not have any link with the object of the demonstration and which testify to a will to infiltrate a just and universal cause - anti-racism - by the hatred of Jews and Israel. 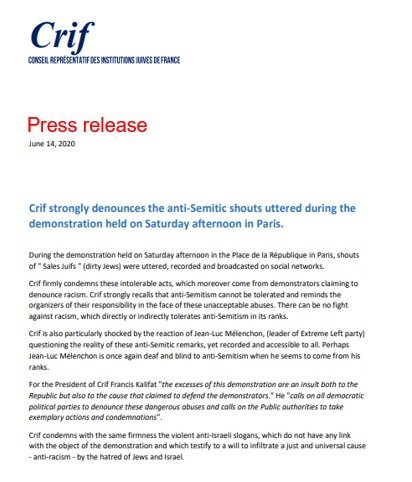